is a delightful teacher well known for her ability to take shy students and help them blossom into vibrant confident performers.  How? She has a very nurturing and caring attitude towards her students, often taking time after classes to simply chat.  Her requirement for students is for them to achieve  and set new goals for themselves as they advance in their dance studies.  She truly personifies the goddess 'Isis' in many aspects as a guide and mentor for your dance journey.

Isis started her own journey by simply taking a 'Belly Dance' course at the local TCJC (Now TCC) in Hurst, TX.  It was simply to keep in shape and she only chose that particular class because it was the last exercise class with room still available!  Talk about fate!  Once she fell in love with the dance form there was no stopping her enthusiasm or her skyrocketing career!

From there she continued her studies with top Mid-Eastern dancers in the field, including Morocco and Serena from New York, Amaya from New Mexico, Tahmi from Dallas, Vashti from Dallas, Bert Balladine and Suhaila & Jamila Salimpour from California, Mahmoud Reda of Egypt, Ibraham Farrah from New York and Raqia Hassan of Egypt as well as other famous dancers from around the world.

She has had her own studios since 1978. The beautiful studio in Bedford is the culmination  of her dream to give dancers and teachers some place special to call their own. At this studio an exciting array of classes are available for your enjoyment.  There are classes in Arabic Rhythm Tabla, Fusion and Hula, as well as special workshops throughout the year.  ALL of her instructors are the best in their field, in the Dallas Fort Worth area, so if you are looking for top notch classes or to simply have fun, we'd love to have you join us. 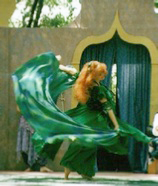 Did she always plan on being a Middle Eastern Dancer?  No! In fact her earlier career was in stage performance.  As an actress she performed many times at Casa Manyana in Fort Worth and various other theatrical venues.  All of this experience on stage became the most valuable building block for becoming a Middle Eastern Dancer.  Anyone who has studied with Isis knows that your entrance, exit and entertainment skills are a main 'wow' factor that she teaches right from the beginning. Professionalism at its best!

Isis became the featured Mid-Eastern dancer at Kosta's Greek Restaurant on Bachman Lake in Dallas for eleven years and a featured entertainer at Byblo's Lebanese Restaurant in Ft. Worth and the Greek Isles Restaurant in Plano for New Year's Eve shows each year. She and her dancers have been featured at Scarborough Faire since its opening in 1981