Dalia Carella is a renowned world fusion artist, choreographer, master teacher, and the Founder/ Artistic Director of the Dalia Carella Dance Collective. Her rich background has lead her to make works utilizing both ethnic and contemporary movement, that are ingrained with a deep spiritual and mystical essence.   She is known for her explorations into cultural dance forms, her precise and seamless blending of traditional and modern dance in the theatrical context, and for her dark and sultry cabaret stylings, evocative of the European underground, circa the 1920s and 30s.

As a master teacher and choreographer, Dalia brings with her expertise in a wide variety of world dance that she has studied, including: Flamenco, Indian (Bollywood and Bhangra) Afro-Haitian, Samba, Salsa, Bomba and Plena, Tango as well as jazz and ballet. In 1985, she created her "Dunyavi Gypsy (Roma) Dance", a signature dance form, for which she is known throughout the world. The core of Dunyavi work is Dalia’s extensive research of the Romany trail, focusing primarily on the Roma dances of Spain, India, Turkey. Dalia also performs and teaches a second style of Gypsy Rom dance, “Flamenco Araby/El Mundo”, that blends Middle Eastern, Flamenco and Latin dance influences.

“Few dancers exude as much joy as Carella, a ravishing woman of singular confidence and dramatic expression whose role models must be Ruth St. Denis, Katherine Dunham, and Ava Gardner.” Eva Yaa Asantewaa, the Village Voice

“Dalia Carella is an accomplished artist. Watching her brought back memories of the power of the eastern dance of Ruth St. Denis early in the century and the inspiration that gave to another American girl, Martha Graham. She brought back the grace and mysteries of the East. A final solo based on Turkish, Spanish and Indian Gypsy dances had us all cheering!”  Francis Mason, (WQXR Radio, New York)

“Dalia Carella has star power. Performing a highly original fusion of Middle Eastern, modern, and other world dance forms, she bewitches her spectators, while seeming to excite herself, with a sizzling allure that is almost frightening.” Lisa Jo Sagolla from Backstage 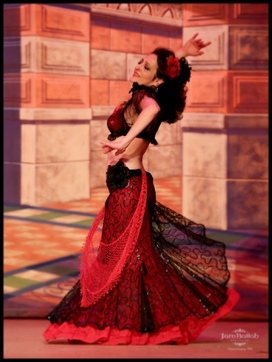 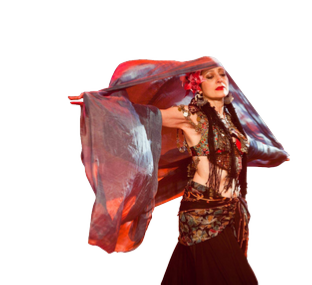