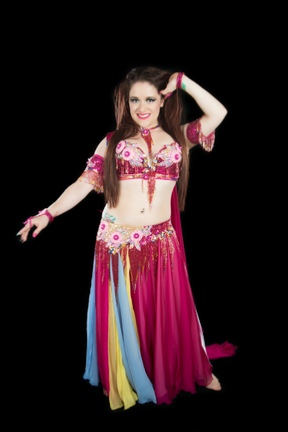 Gaia is a second-generation dancer, her mother learned the art in the 70's in Syracusse, New York, and it was through her that this passion for Bellydance was instilled in Gaia. Since childhood Gaia has trained not only in Bellydance, but also in ballet, modern dance and Latin American folk dance.

In 2000 she began to devote her life entirely to Belly Dance and in  2006 she founded one of the largest schools of Bellydance in her country, the Academy Aidah Manaar. Since 2007 she has been a member of the International Dance Council CID - UNESCO. Working to certify its comprehensive program of dance medium East, which has been a bridge for the professional development of dancers in Costa Rica.

In 2010 Gaia, with her group, Gaia's Troupe, won first place in the category of Professional Bellydance Troupe at The Bellydance Masters in Orlando, Florida. In 2014, they won the award for Best Choreography Bellydance Troupe in the first championship of Arab dances in Costa Rica. Gaia has been invited to be a teacher and choreographer at Orlando Florida Bellydance Masters. She is renowned for her unique innovative style, and music interpretation, which won her in 2015, the Bellydance Fusion Champion of the Universe, Los Angeles, California.

She was winner of the Pro Tribal / Alternative /Fusion Star Soloist, plus the Pro Cabaret Solo Star and Photographer's Choice at Yaa Halla Y'all 2015.

Currently Gaia, conducts workshops and certifications outside and inside the country, has the first site online classes in Central America and is an Instructor Certified in Zumba Fitness. Her main objective is to share her passion of Bellydance with students everywhere she travels to teach and perform.