Heather has been with Bellydance Evolution since its creation in 2009.  She is one of the main choreographers and Associate Artistic Director for the company and has performed with them in all three of their productions throughout the USA, Europe, Latin America, Africa, Asia and Australia.

Born and raised in Los Angeles, CA. Heather began dancing at the age of five. Studying modern jazz & ballroom, ballet, hip-hop & contemporary. At 9 years old she was invited to join a Los Angeles based performing group, where she quickly became one of the lead dancers.

By the age of 13 Heather was already an Award-Winning choreographer & a lead dancer in 3 different dance companies. That same year she performed at the Rose Bowl along with Cirque Du Soleil & Smokey Robinson for over 40,000 people.

Heather graduated from High School at 16 in order to pursue her career full time. Also a professional singer, Heather has recorded with Grammy and Oscar winning songwriters.  She has also recorded for composer Paul Dinletir on the animated series Samurai Jack and toured the Caribbean as the lead singer on the Freewinds cruise ship.

At 18 Heather was cast by Kenny Ortega (Dirty Dancing Choreographer and Michael Jacksons final tour Director) to dance on the Fox TV show “Grounded for Life” which earned an Emmy nomination for Best Choreography. That same month she was invited to join the International Dance Company, Jillina’s Sahlala Dancers.  Having fallen in love with Middle Eastern dance, she put all her focus on learning the art form and quickly became a lead soloist for the Award Winning Dance Company. She has been featured on numerous Bellydance performance DVDs and was also seen on the ABC show “Dancing with the Stars” alongside the company.

In 2015 Heather took a break from touring with Bellydance Evolution to give birth to her second daughter.  She has since returned to the company to help choreograph and direct their newest production, Fantasm – Odyssey of Dreams. 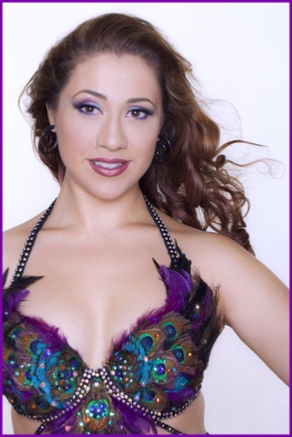