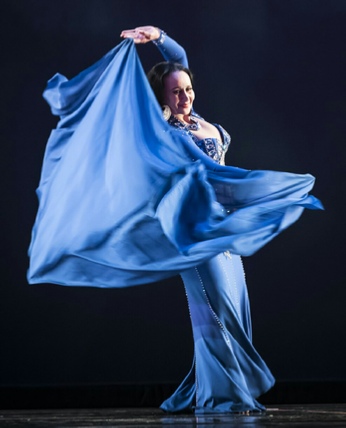 Helena Vlahos was born on the tiny island of Hydra (or Ydra), surrounded by the crystalline blue Aegean Sea and sky.  An islander's life was punctuated by weddings, feasts, and holidays filled with joyous celebrations of song and dance. Greek music, though a genre unto itself, shares many characteristics with Arabic music.  As a result, little Helena was immersed in a kaleidoscopic array of Middle Eastern melodies and rhythms.

Even though the Golden Age of Athens has long since passed, the concept of Dance as a socially viable profession is deeply imbedded in the Greek psyche. So it's not terribly surprising that when Terpsichore, Muse of the Dance, beckoned to Helena, her family accepted her interest as natural and appropriate. Distant relative FoFo De Milo, a Greek-American dancer/entertainer and first owner of the Greek Village Restaurant in Hollywood, spotted young Helena dancing at family celebrations. FoFo sensed that Helena was a natural talent, and offered to give her dance instruction in exchange for help at her studio. Helena points out that, at the time, there was no such thing as a teacher only of Belly Dance. An aspiring dancer learned what she could by watching other dancers, asking questions when welcomed to, and studying with a Middle Eastern entertainer such as FoFo, who "did a little bit of everything", including some Belly Dance. So it was FoFo who began to teach Helena professionalism. Helena poured her energies into learning about the world of Belly Dance with increasing fervor. Then in 1964, FoFo took her to see a newly opened club, the Athenian Restaurant in L.A. As was customary, the club's owner encouraged young ladies to get up and dance. Helena obliged, and the owner promptly invited her to dance at the restaurant's upcoming Grand Opening. A Star had been born in Southern California that night.

When questioned as to how she knew that Belly Dance was to be her career, she speaks of this night: "When I stepped on the floor, I think, my first step on there, I knew. I was very shy in school...but in the Dance I felt secure and in control...Of course when I danced that first time, I had greats like Rosalind Russell and Edward G. Robinson right there (in the audience); those two I really remember. Rosalind Russell to me looked so beautiful, and I'm sure I couldn't have been very good, but she was looking at me like I was the best dancer in the world. And I was getting such applause!"

An interesting event took place when the Bureau of Alcohol,Tobacco, and Firearms received an anonymous tip that a sixteen year old girl was performing at the club. Undercover agents showed up on the scene and questioned the club's owner about the age of their dancer. She replied that the young lady was twenty-five. Helena, who'd been in the dressing room came out, and the agents asked her how old she was. "Sixteen" she replied sweetly. They were not amused! Helena was whisked off to the juvenile detention center where she received a good many amused looks, then received a thorough scolding from the head Matron. Helena was released into her mother's custody, and told NOT to do it again until she was 21. Two weeks later, she was back onstage.

Her career blossomed, and she enjoyed all the engagements she could possibly handle.  Everything about the Belly Dance scene suited her to a tee; she looked mature enough even at sixteen to work the clubs, was a natural-born night owl and had an inborn affinity for the Dance. For the first time in her life, Helena felt that she'd found a place where she truly belonged. She's quick to note with a chuckle, that like all young performers, she had quite an over-inflated ego in her first couple of years performing, and when she found out (mostly from her own sister's truthful comments) just how unpolished she could look, it was an extremely humbling experience! At one point, an elderly Middle-Eastern patron took her aside and told her she "ought to learn to use her hands, like Marliza (Pons)", and although this left our young lady somewhat incensed at the "old geezer", a bit of self-observation led her to recognize the truth in his words. Early on, like so many dancers, not using her hands to complement her moves was a weak spot. So, wisely valuing progress over pride, the fledgling entertainer learned to be open to the gifts of well-intended criticism.

From L.A. to Hollywood, up and down the California coast, to Houston and Austin, Texas, spots in Ohio and Georgia, and even Hong Kong, Helena's Dance has taken her to many wonderful places. The American West remains her favorite region, however.

As any good performer knows, a sense of humor is essential to a successful career. Much as we try to do our best, life will inevitably throw the spotlight on us, just when we're making complete, if unintended, fools of our selves! Perhaps the first thing that strikes you about Helena aside from the absolute graciousness of her bearing is her humanity. This woman can laugh at herself, and heartily, too. So when asked to relate some of her worst moments, she first says, "Oh, but there've been so many!" Then after thinking for a moment obliges with some real good ones. Such as:

Her worst performance nightmare---The place was the Barefoot Bar of the Vacation Village Hotel at Mission Bay in San Diego, and Helena found herself elected to do the "Sultan Act" (getting a man from the audience to join her onstage). She relates that she's never been fond of this bit, but that it was unavoidably her turn, so she selected her "victim" and got him up on the stage, which was quite small for two people. Everything was fine till she gave the fellow a side bump with her hip to get laughs; and he unexpectedly reciprocated with a sharp return bump that threw her off balance. Her arms flailed down and out as she struggled to avoid falling into the audience; then all of a sudden her hand got hold of a soft mass of fabric and flesh: his crotch, to which she unwittingly proceeded to hang onto for dear life. Needless to say, the audience went wild with laughter, but she was mortified!

We come now to an issue of concern for all our fellow dancers: the disappearance of good places for dancers to perform. While the reasons why the venues are vanishing is material for a whole other essay, the fact remains that since Helena began her career, clubs with facilities to showcase Middle Eastern Dancers and live Middle Eastern musicians have dwindled to an alarming degree. Nightclub productions of the Dance as found in the native Middle Eastern countries are all but vanished in the United States. Discussing this topic, Helena doesn't hide her sadness; it shows in her eyes and in the tone of her normally lively dialogue. Thirty-six years in the Dance, Helena has been witness to the slow but steady exit of one good club after another. Things such as a clean, simple dressing area separate from customer restrooms; a stage with adequate floor space to perform the whirling ecstasies of veil work; a live ensemble of accomplished, Middle Eastern musicians; good lighting that complements the Dancer's appearance; all these features so essential to the Art are now very rarely encountered. The Dance in America lives now, says Helena, through the dedication of the performers who work hard to keep it alive. In place of the clubs, there has been an explosion of workshops, seminars, and dancer-sponsored festivals. While such activities are a welcome respite for those who love the dance, the loss of the clubs and the public appreciation of the Art is a great cultural tragedy.

By this time, a good sketch of Helena's character has emerged. We see a beautiful, mature woman with a dauntless spirit and the grace, humor and polish that can only come from Life's refining forces. Dedicated to learning, Helena has continuously reached out to educational opportunities that suited her. She has taken instruction in Flamenco and Ballet dance forms to aid her in the Belly Dance, and attended countless seminars and workshops. It is her dearest hope for the future that club owners and the Dance community will once again thrive as Belly Dance comes into a seeming new age of popularity, perhaps even achieving the public understanding necessary to effect the appreciative environment of the native Middle Eastern clubs. In all of this she sees the internet as holding out the greatest potential to help spread such an understanding.

Helena is on the Executive Panel of Judges for Tonya & Atlantis'™ Belly Dancer of the Universe Competition every February in Long Beach, California since 2005. Helena has mentored dancers who have gone on to win titles in competitions including the BDUC.

Helena is  a featured dancer in a new DVD  "American Belly Dance Legends" produced by Amaya and in Damon the Gypsy's DVD "Dance Little Gypsy".  She is the recipient of MECDA's Arizona Lifetime Achievement Award 2011 and was nominated MECDA's Favorite Arizona Cabaret/Oriental Dancer 2011. Helena moved back to Los Angeles in the fall of 2011, where she teaches and performs when not traveling for master workshops.