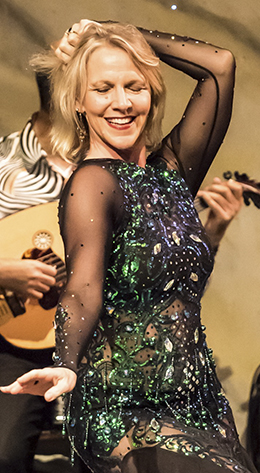 Karen began studying Belly Dance at the age of 10. Over four decades later and after years of professional performances, Karen has developed a teaching methodology for this ancient dance form based on technical precision, soulful innovation, and cultural respect.  Having begun her study of Belly Dance during the 1970’s, a period of limited explanations, she developed her own. Her background and former career in Systems Analysis has assisted her in her quest to analyze movement, deconstruct that movement, and explain it to others in a logical way.

Karen’s years of teaching have enabled her to hone her teaching skills and develop a strong philosophy and curriculum which has been presented throughout the United States, Central and South America, and Asia.

A pioneer in online Middle Eastern dance instruction, Karen has introduced and populated a library of over 1000 hours of online instruction that now teaches dance technique, combinations, choreographies, improvisation, and other classes from special guest instructors.

Having spent decades performing in the Arab nightclubs of Houston, Karen has most recently developed the “Project Band” curriculum for her students.   Through this process, Karen guides dancers toward Performance Improvisation and affords them the opportunity to work closely with some of the most highly acclaimed musicians in the business.

Karen has operated Karavan Belly Dance Productions in San Antonio, Texas for over 30 years, directed numerous staged productions of Middle Eastern Dance, studied and performed in Egypt and Lebanon, produced several instructional DVDs and music CDs, and has trained some of the country’s leading professional dancers.