Persephone is both a professional dancer and musician who was born and raised in Mobile, Alabama. She comes by entertainment quite honestly, her father is a professional jazz musician, stage magician and ventriloquist. She began performing in her father’s magic act at the age of 3. Her studies in music began around that time as well, but she was 12 when she began professionally performing as a musician. She toured with her father’s magic show and bands so frequently that she had to be home schooled from 7th grade thru high school. In high school she also began studying music composition and attended the Cleveland Institute of Music (a music conservatory in Cleveland, OH) and the University of North Texas majoring in composition. She has earned many awards and scholarships for music composition, oboe performance, and clarinet performance. She currently teaches and performs as a musician (Clarinet, Oboe, Flute & Bassoon) throughout North Texas and she composes works for middle and high school band students as well as Middle Eastern drum pieces.

Persephone first discovered Belly Dance in 2011 where she began studying with Isis Bartlett at the Isis Academy in Bedford, TX. She has been a member of the Raksettes, Isis Professional Performing Company, and the Isis Cultural Dance Team. In January 2019 she auditioned for and earned a position in the Wing's of Isis Dance Troupe. She is a multi-award winning dancer and her honors include:

Persephone regularly performs in fusion and cabaret styles through out DFW. 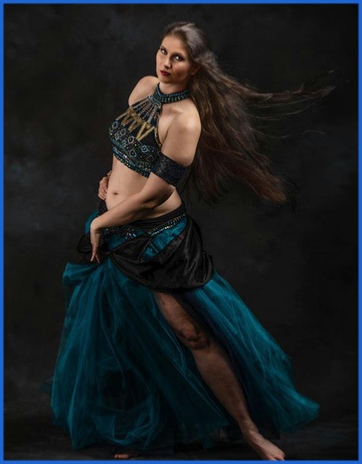