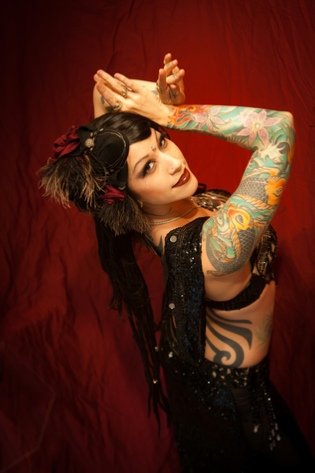 Known the world over as one of the pioneering forces in the field of Tribal Fusion belly dance, Sharon Kihara is regarded as one of the most seasoned and well-traveled artists in the genre, and is known for her avante-garde artistic sensibility that defies replication. She is both a dance and yoga therapy teacher, 200 RYT certified by Yoga Alliance.

Sharon began her training at three, beginning the way most dancers begin, at the ballet barre.  Jazz, Tap and Congolese would follow soon after, and by the age of ten, Sharon stumbled upon a treasure- a belly dance performance featuring the world renowned dancers Aziza and Yemaya, and it was indeed life changing.  Belly dance became a life obsession, and at age 13, Sharon began performing. Later she pursued degrees in choreography and kinesiology in tandem with holistic medicine, and performed regularly with her college repertory contemporary dance company.

Sharon’s education in belly dance has been eclectic, beginning with the legendary Zamara, grand-niece of Ruth St Denis, in Oregon in 1994; later in San Francisco with Frederique David and Jill Parker as a member of Ultra Gypsy, one of the foremost innovating companies in the earliest days of Tribal Fusion.  Later Sharon studied immersively with Suhaila Salimpour as a certified dancer and member of the Salimpour school.

In late 2003, at the behest of friend Rachel Brice, Sharon was scouted to perform with the pioneering dance company Bellydance Superstars, created by music mogul and svengali Miles Copeland.  Sharon spent over five years on tour as Tribal director, soloist, and choreographer.  After leaving the tour to pursue new dreams, she was recruited by Jillina to dance as a principal and choreographer in the unique and critically acclaimed new touring production, Bellydance Evolution.  Sharon is in the rare position of being the only Tribal dancer to have been featured as Principal dancer in two of the world’s most distinct international touring belly dance companies.

So far, Sharon has performed for countless audiences worldwide and has taught tens of thousands of students in over 60 countries.  She has appeared on numerous television shows and music videos, and has been featured in radio and media worldwide, as well as several Bellydance Superstars and Bellydance Evolution DVDs.

Sharon is happily residing in beautiful Portland, Oregon where she has recently created the Catharsis Dance Collective, a world dance studio and performance group. When not creating in the studio, or traveling the globe on tour with Bellydance Evolution and offering seminars and workshops, Sharon enjoys purveying antique tribal and fine jewelry, playing with her bulldog, and pretending that decaf is “real” coffee