Silvia Salamanca is an internationally acclaimed performer and instructor from Mallorca, Spain.  A life-long dancer, she graduated at the age of nineteen as a major in ballet and performed professionally as a modern dancer in major Europe festivals with the contemporary dance company of the University of Barcelona.

She started her career as a belly dancer in 2001, when realizing the enormous benefits that this art-form brings to women in both body and soul. In her own studio, she keeps observing how women can get closer to their self identity and discover oneself in a new level, increasing self-esteem, and getting deeply in touch with the feminine essence in their soul through belly dance.

As a natural evolution in her journey, Silvia discovered tribal fusion in the USA and combined it with a deep research into her own cultural roots: Spanish Gypsy and Arabic. Hence with her work in the field of Zambra Mora (Spanish Gypsy-oriental dance fusion) Silvia gained international recognition and is currently invited to teach workshops and perform in major festivals world-wide, including being twice headliner for the Contest of the Bellydancer of the world in Germany, and being featured as the local talent for the Bellydance Superstars shows in October 2011 – Houston. 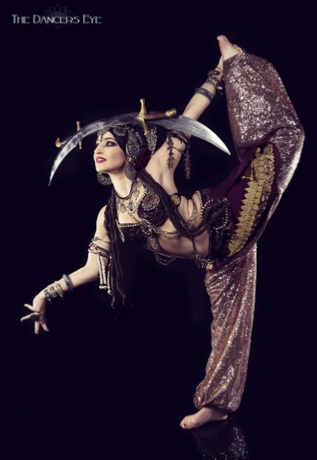