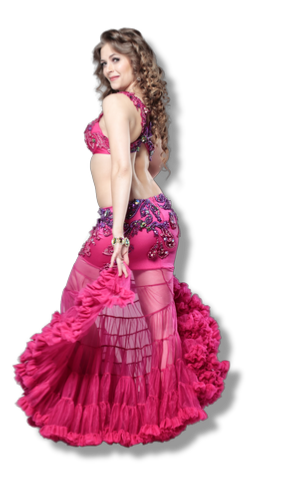 …........... is an award winning belly dance performer and instructor. Beginning in 2006, Victoria Teel has studied multiple dance styles including Egyptian, Turkish, American Cabaret, Egyptian Folklore, and Spanish fusion belly dance. Quickly a passion grew for the dance and culture and she soon began working with internationally acclaimed artists, directors, and producers. In 2010, Victoria was chosen along with 24 other dancers to participate in the worlds first ever belly dance reality show, Project Belly Dance. She placed among the top six contestants, earning her spot in the 'Final 6' instructional DVD released in March 2011.

Victoria is internationally recognized for her unique fluid dance style and effortless execution. Her instruction method focuses on flow and how to create a seamless piece of choreography for any style. She is also the creator of the 'Teel Fan Method', a dance technique using fans and fan veils incorporating influences from Asian dances.